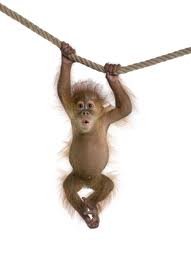 Have you ever heard the theory of the 100th monkey?

In the 1950’s biologists and anthropologists were studying the behavior of a species of monkeys that live on some of the outlying islands around Japan. In order to gain the confidence of the monkeys and get close enough to study their behavior, the scientists would place sweet potatoes on the beach. The monkeys adored these moist potatoes (called batatas), but disliked the sand clinging to them. One day an adolescent female monkey (about eighteen months old) on the island of Koshima, solved this problem by washing her batata in fresh spring water.

She taught the “trick” to her mother, and then to her playmates, and over a period of time most of the monkeys on the island learned to wash their batatas to get rid of the sand. At this point perhaps 99 monkeys had been trained in this behavior. One day the 100th monkey learned how to wash his batata. By the next day every single monkey on the island of Koshima was doing this – even the ones who lived a bit more isolated from the others and had never witnessed a demonstration.

But what was particularly astonishing was that this new behavior was suddenly observed in the populations of these same species of monkeys on the other islands. Every monkey in the remote outlying islands was washing away the sand on their sweet potatoes without ever having been taught how to do it!

The number 100 may not be exact, but the theory of critical mass evolved from this study: That once a certain number of a species learns a new behavior and that number reaches a critical mass, it can spontaneously be transmitted to all members of the species. This was very encouraging to metaphysicians and philosophers, who envisioned a time that a significant percentage of the human species, having learned to live with one another peacefully and harmoniously, would reach a critical mass and transmit this behavior to all of humanity.

I first learned about this study about the time I opened my private practice in LA in the mid-80’s. I so enthusiastically embodied the ideal of the 100th monkey, that whenever I treated a new patient I would think “maybe this is the 100th monkey. Maybe if he or she can learn to take responsibility for the state of the world and make the appropriate inner changes, the world will become a better place.”

One day I made an important discovery: I AM THE 100TH MONKEY!

And if I am the 100th monkey, that would mean that every change I make in myself can have an impact on the world. This realization was a turning point in my own journey as I began to take more responsibility for the circumstances of my life, rather than attributing misfortunes to bad luck or someone raining on my parade.

Taking responsibility isn’t about being at fault or blamed. It’s a conscious recognition that we had to play some role (even if only the tiniest little part!) in the circumstances that we find ourselves involved in; And not only in our personal dramas, but also in the overall condition of the planet.

If we can’t stand the hate and hostility that seem to prevail now around the world, why not examine our own petty resentments and unwillingness to bend in our beliefs. If we are bothered by growing world-wide pollution and environmental destruction, could it be a reflection of the contaminated thoughts and feelings that persist in our psyches? If terrorism is an issue, what about how we allow our own inner fears and judgments terrorize us? Do we expect things from our children that we are unwilling to change in ourselves?

Everyone is the 100th monkey.

Consider how you can take responsibility for those areas in your life that are not functioning the way you would like. It’s an easy route to be passive and claim our role as victim, but unfortunately, that will never alter the situation in a pro-active way. What can you own up to in a relationship problem, communication obstacle, or what has seemed like an unfair break?

This is not about being hard on yourself, and definitely NOT about self-punishment. Just reflect on how you may have contributed to the situation. It’s a powerful first step. And more will be revealed as you go along.

The changes I am making in myself are positively influencing those in my world.

If you like this “recipe for mind” please Fan our Facebook page for daily tips, tools and techniques to balance body, mind and spirit.

WOULD YOU LIKE TO MAKE A DIFFERENCE IN THE WORLD?  Be trained by Dr. LJ and Sherry Matthews as certified Meditation and Mindfulness Instructors with a dual certification in becoming a Spiritual Wellness Specialist     This is a brand new course launched July 2020.  Together, we can change the world.

Click here for more information on the Dual certification