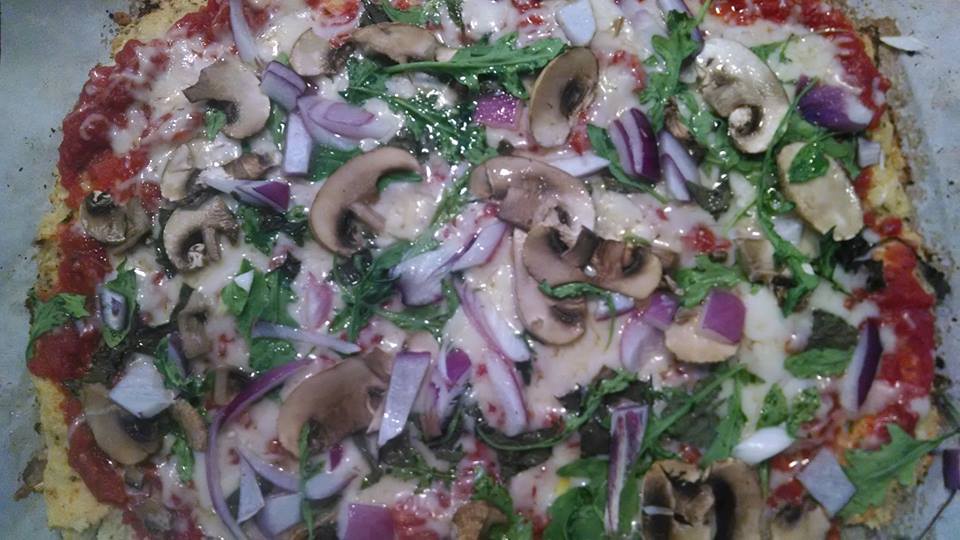 Cauliflower has become one of my favorite foods and definitely a great alternative to potatoes, corn, wheat and other grains as the carb impact is much lower.  A member of the Brassica family of vegetables, a recent study found that these crunchy veggies can lower breast cancer risk by at least 15%.

Steamed and smashed with a bit of healthy oil and either a touch of cream or nut milk, it makes a hearty substitute for mashed potatoes.  Roasted over leafy greens, it’s one of my favorite Raw Fusion Meals.  It even makes a nice snack, dehydrated as a popcorn substitute for movie night.

So when I heard the buzz about making a pizza crust with cauliflower, I was all over that idea!  Doing some research online the recipe that most stood out to me was from a food blog that I absolutely adore — The Detoxinista.  Megan is one of the most creative chefs I’ve seen and many of her recipes fall right into the raw fusion category.  I also love that she recommends goat cheese because it has a smaller protein molecule and much easier for human’s to digest.

The first time I attempted this, I didn’t bake the crust on parchment paper and it simply did not come out well.  Then I made this for my Heart Healthy Living patients in West Virginia last month and the results were amazing and super popular.  The crust really does taste and perform like a flour-based one.  Because so many of my followers are vegan or have sensitivies/allergies to dairy, I decided that I would make a vegan version, based on the basic recipe from Detoxinista, which you can see here.   To replace the goat’s cheese I used Tofutti “better-than-cream-cheese” – bought the garlic herb one by accident but the flavors were compatible with the dish.  I also added a tablespoon of grapeseed oil to replace some of the fat that goat’s cheese might have over the vegan version.

NOTE:  To substitute an egg, you can mix 3 tablespoons of ground flaxseed with about 1 tablespoon of water – this is called a “Flax Egg”.  It is always better to grind the flaxseed fresh, as you need them.  I use a dedicated coffee grinder for this purpose. 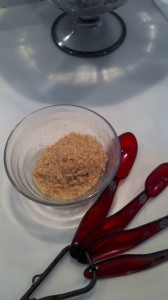 Directions:  Break the cauliflower into chunks and pulse in food processor until it becomes “rice-like”  — you can also grate it.  Steam in about 2 inches of water for just a few minutes until it softens.  Drain an then place in the center of a kitchen towel and SQUEEZE out all of the moisture.  NOTE:  The more moisture you get out of the cauliflower rice, the better this will come out.  Return the rice to the food processor and add the rest of the ingredients and pulse until blended well. 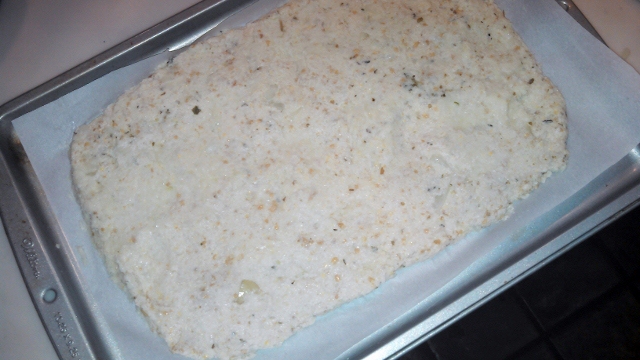 Preheat oven to 375 degrees.  Cover a cookie sheet with a sheet of parchment paper.  Form the crust in a rectangle.  You may want to make the sides slightly higher so that the toppings don’t slide off.  Bake about 35-40 minutes until browned. 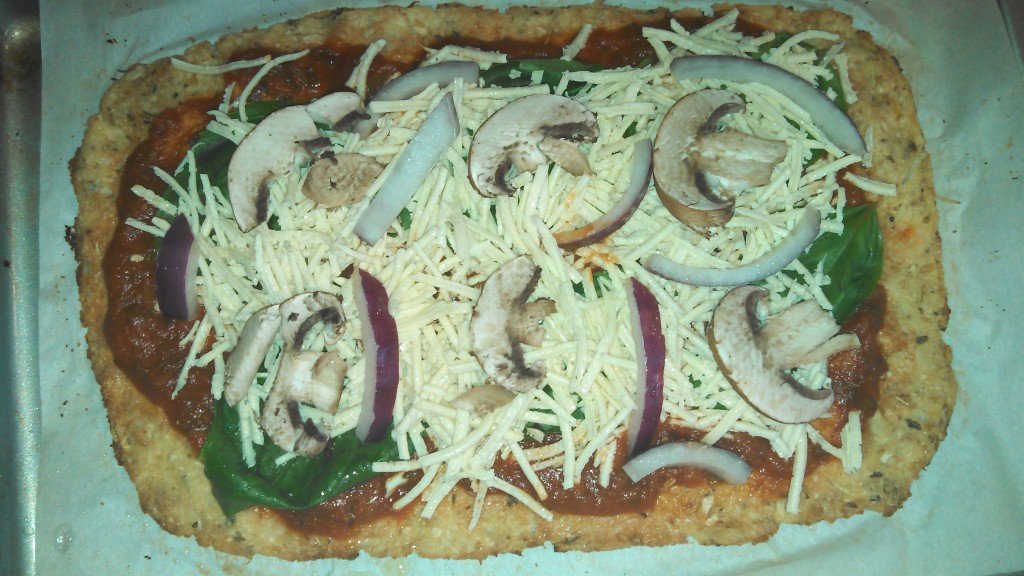 Remove from oven and add toppings:  I spread an organic pasta sauce and then used Daiya vegan mozzarella cheese, basil leaves, red onion and mushrooms.  I sprayed a little olive oil on the top of the veggies, using my Misto.   Return to oven and bake until the cheese melts and the sauce bubbles. Also topped this with some nutritional yeast when finished in lieu of parmesan cheese.

THE VERDICT:  The vegan version was “okay” – not something I would probably serve again as it was not a hit with the family – in fact, my husband offered me his pieces, which I warmed up the next day.  I’m glad I did the experiment and for individuals who would like a completely dairy-free version, this could be the answer.  Will definitely make Megan’s vegetarian version 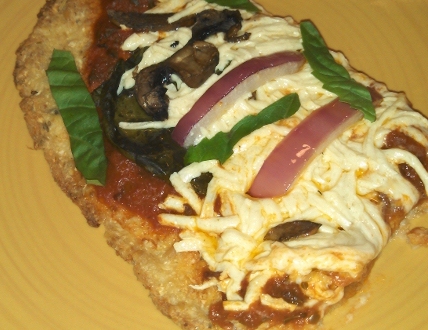 FOR DAILY RECIPES FOR BODY, MIND AND SPIRIT AND TIPS, TECHNIQUES AND TOOLS FOR YOUR WELL-BEING PLEASE LIKE US ON FACEBOOK!