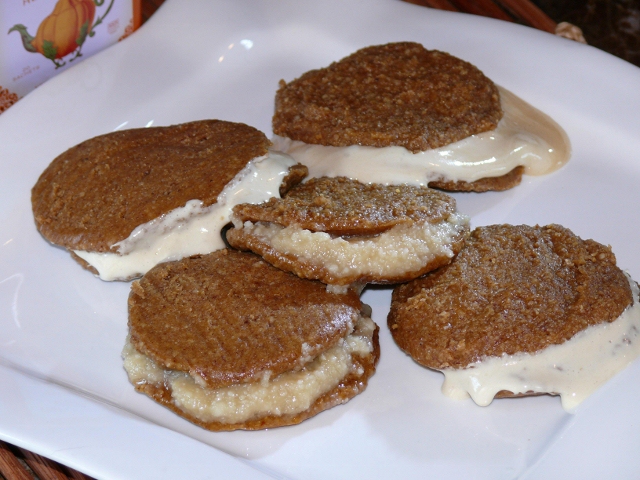 Rounding out my pumpkin experimentation this week are two new offerings:  Pumpkin Whoopi Pies made raw fusion style  with 2 different fillings and Pumpkin Walnut Hummus (see photo and recipe below.)

This whoopi pie adaptation is based on a recipe contributed by Missy Brown of The Raw Alchemical Kitchen in my Raw Fusion Living: Recipes of Healthy Eating, Natural Weight Loss and Anti-Aging.  Cleverly called Quookies, the base of the pie is formed by an unusual pairing of quinoa and pecans, to which I added several tablespoons of canned cooked pumpkin and pumpkin pie spice to convert it to our whoopi cake layers.  Although this is a raw fusion recipe, using both raw and cooked ingredients, the filling 1 version of this recipe could be made fully raw by substituting with raw shredded pumpkin and adding a quarter cup of water.

I have made Quookies for classes at Whole Foods a few years ago, but added cacao powder (or Hershey’s unsweetened cocoa) which makes a nice chewy soft chocolate cookie.  I even made larger versions to be used as layers for a  “candy cane cake” for a Christmas creation one year, with coconut butter icing colored with fresh beet juice and even with liquid chlorophyll for a green layer.  The layers were a bit delicate but it was fun to make a raw cake for the holidays.

Quinoa is more of a seed than a grain.  Raw foodists always soak quinoa in water for at least 6 hours to remove the bitter saponins from the “grains” but I also add in a step of sprouting them for a few hours in order to further supercharge this superfood.  You can learn more about soaking and sprouting in my YouTube video.  These sprout in just a few hours and you only need to see the tiniest tail; much longer and they become more vegetal in taste than nutty.  The cool thing about sprouting them is that they are then really soft enough to eat and don’t need boiling.  If you do boil, literally a minute in boiling water is enough and that way you retain most of the enzymes and nutrients.

These were made in a dehydrator but if you are first learning about this lifestyle and not ready to invest in one, you can make these in your oven.  Always line the cookie sheet with parchment paper; use the lowest temperature on the oven and you can even prop open the door with a mitt or towel.  Once they are dry enough to turn over without breaking, they won’t take too long on the other side.

There are 2 versions for the filling:  One is made with coconut butter, a bit of honey and blood orange juice and the other is a vegan marshmallow creme, flavored with maple syrup.

Directions:  Place pecans in food processor and briefly pulse to break them down.  Add the quinoa and other ingredients and mix well.  Taste for sweetness and add more agave/nectar if desired.  Place parchment paper on dehydrator screen and form 8-12 equal rounds.  Dehydrate up to 5 hours at 115 degrees until they can be peeled gently off the parchment and turned over on the screens.  Then dehydrate a few more hours until dry and pliable but not brittle.

Spread a layer of either filling on bottom and carefully line up another circle to form the pie.  Either eat at room temperature or refrigerate for a couple of hours if you’d like the icing (version 1) to be harder.

Mix several tablespoons of coconut butter with 1 tablespoon of blood orange juice or minced orange peel and a tablespoon or two of and blend will with a fork or whisk.  This will turn into an icing if refrigerated.  Great source for coconut butter and other raw, superfood ingredients  www.livingtreecommunity.com.

Mix several tablespoons of Suzanne’s Ricemallow Creme (vegan, made from brown rice syrup and one of my favorite raw fusion pantry items!) with organic maple syrup until you have a spreadable consistency.

The base tastes just like gingerbread cookies!  These were a surprisingly delicious after-dinner treat and fun to make.   At room temperature we preferred the marshmallow filling but refrigerated a bit, the coconut one rocks.   Let me know what you think if you try them. 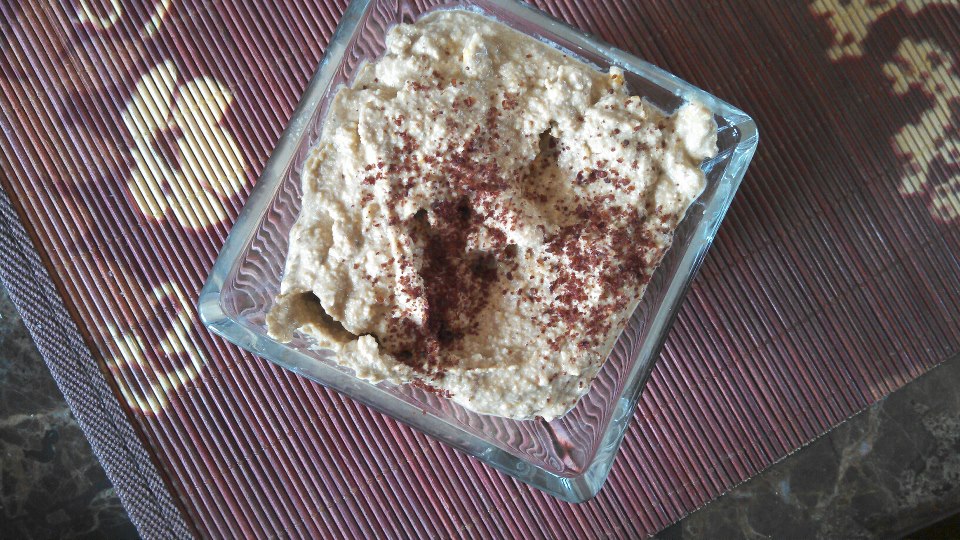 For practical tips, techniques and tolls on the Raw Fusion Lifestyle and Daily Recipes for Body, Mind and Spirit fan our Facebook page.