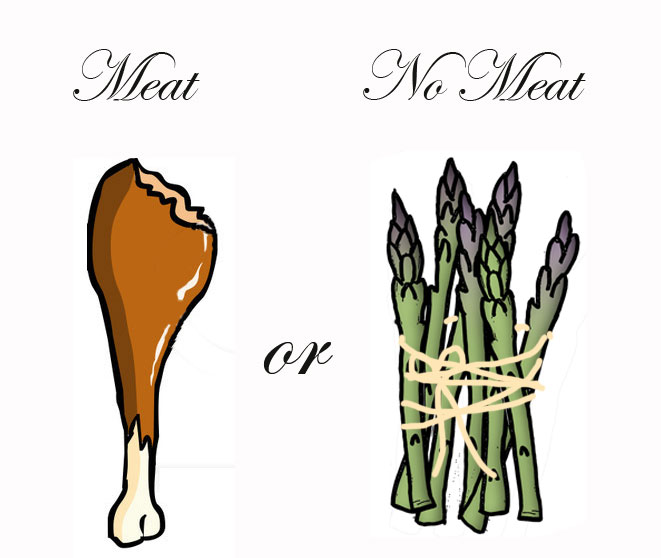 A few weeks ago, after reading Eating Animals – a rather scathing book that denounced eating meat for moral, environmental, and health reasons– I decided to do something radical: I was going to become a vegetarian.

First, I’d like to list some of the reasons that vegetarianism appealed to me. The biggest was environmental. According to the UN, “A global shift towards a vegan diet is vital to save the world from hunger, fuel poverty and the worst impacts of climate change.” This is a pretty big statement; so let me share some facts to back it up. The first, provided by the Environmental Working Group, shocks: “If everyone in the U.S. ate no meat or cheese just one day a week, it would be like not driving 91 billion miles – or taking 7.6 million cars off the road.”

Here is a stunning statistic, derived from Eating Animals: Americans choose to eat less than .25% of the known edible food on the planet.”  The author goes on to show how we feed mass-produced animals so much corn that it would be enough to wipe-out world hunger completely. That is heart wrenching, considering that, according to Stop the Hunger, 4,915,994 people have died from hunger so far in this year alone (consider that 2013 is not even halfway over yet!).

To my disappointment, my boyfriend immediately said no.

“Look at you! You’re iron is low already, and now you want to give up meat? You’ll die! You cannot live without meat.”

I brushed aside his words of discouragement until later, at my check-up with my doctor for the aforementioned anemia, when I mentioned my decision to go meat-free.

I had expected my doctor to lavish me with praise; In a sea of college students with unhealthy habits like fried chicken, I was the one shining star who had risen above and chosen the higher path: health. My fantasy was soon shattered.

My doctor reacted just as negatively to my new-found conviction as my significant other had.

“You are too thin and your iron is too low. You need the protein and iron ONLY meat can provide. Humans need meat.”

At first I took their words at face value; Later, however, with some critical thinking and a review of some chapters in Raw Fusion Living: Recipes for Healthy Eating, Natural weight loss and Anti-Aging,  I decided to find out for myself whether their opinions were fact-based or simply assumptions fueled by a culture that is afraid of anything off the well-beaten path. Thus began my search through countless google results.

Reader’s Digest tries to give both sides of the story. According to their sources, meat does provide essential nutrients like protein, zinc, potassium, and B vitamins, but all of these can be just as easily absorbed from plant-based foods. The negative argument they provided against eating meat was far more convincing. Harvard conducted a study over 28 years of the food choices of over 121,000 adults. The meat eaters had bead news: they were 13 percent more likely to die from diseases like heart disease than cancer before the conclusion of the study than the vegetarians in the group. Even worse? Eating processed meats increased this amount by a whopping 20 percent. Chilling. Articles on both WebMD and New York Times agreed with Reader’s Digest, further citing the negative effects eating meat causes.

US News illustrated that vegetarians can have a well-balanced and nutrient-complete diet without any meat involved. It also had the best advice. When asked “Are there health risks [associated with vegetarianism] the answer was splendid “No, as long as you create a sensible plan.” This is a sentence that can apply to any area of life.

So, health is not a matter of meat or no meat. As with most things in life, it is a matter of both preparation and a willingness to learn. You can be healthy while on a diet that incorporates no meat; however, it requires a studious attention to detail—You must plan every meal in order to ensure the correct combination of nutrients to nourish your body. Isn’t it the same with any diet, though?

In the end, I decided to opt for a diet that allows meat, albeit at a much lower rate. I am not yet dependable enough to craft my meals so that I get the right amount of each essential vitamin, considering that my schedule is ever changing. So, I will dedicate three days a week to a day free of meat, not only to help the environment, animals, and starving children, but also me.

In America, we forget our roots: According to Dr.Sluder, an expert in all matters history, during prehistory humans thrived on a diet consisting mostly of berries and plants scavenged from the forest by the women of tribes. The fact that humans are overpopulating the world right now is testament to the fact that this diet undoubtly worked. So, with a little bit of faith, and a whole lot of learning, it will one day work for me, too.

NOTE FROM DR. LJ:  I decided to share this “teaching tale” from our talented coaching candidate because it fully embodies the message of Raw Fusion Living.  In my book there is a chapter called “To Veg or Not to Veg” and that is a question that each person needs to explore and answer individually.  While we fully honor veganism — what I prefer to call a “plant strong” diet, we do not advocate for this as not everyone is ready or biologically designed to maintain a lifestyle fully free of animal protein.

If you are interested in interested in becoming an educator in the field of Natural Wellness, check out our Coaching Certification, where we will train your in mind, body and spirit dynamics in the most original curriculum available today!