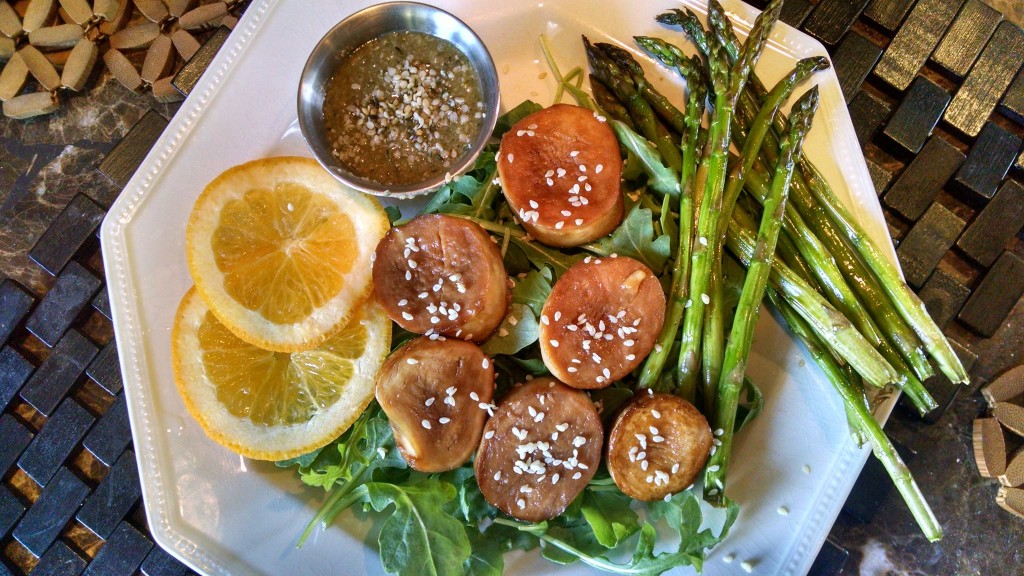 Also Raw and Free of Gluten/Soy/Grains

I got this idea from watching an episode of Top Chef Duels where they had to make a vegan entree.  Oyster mushrooms sliced into scallop-sized discs and sauteed in oil create a taste and texture astonishingly like the shellfish. If you are aiming to be as plant-based as possible and want to stay away from those processed, faux-meat, soy-based frozen dinners, try making them as described (or the raw version below).

Since returning from the London VegFest I am doing a lot of recipe testing and food prep.   I have recommitted to maintaining a high raw foods daily intake and find that it is so much easier when I have some tasty treats on hand.  Did you know that you can store dehydrated crackers, kale chips, crusts and breads in the freezer for instant access?  They don’t freeze, ice over, get soggy or need defrosting.  Just grab and go – they remain crisp and fresh and don’t even get very cold — One of the mysterious secrets (and benefits!) of this wonderful lifestyle.

So I had this idea of trying to recreate the scallops completely raw and decided to marinate the slices in a citrus ponzu-type sauce, made with coconut liquid aminos instead of soy sauce. Because the oyster mushrooms are fat free and I used only a couple of drops of sesame oil in the marinade, I felt like the “scallops” needed something luxurious and creamy to bring out the flavor and whipped up a protein-rich hempseed garlic spread.  After marinating the sliced mushrooms with some divinely fresh and slender asparagus stalks for a couple of hours, I dehydrated them for several hours at about 110 degrees to bring out the flavors.  Dehydrators make wonderful ovens that can deliver a cooked taste and texture.  Read my article about this here:  https://www.naturalwellnessacademy.org/2014/06/dehydrator-cooking-asian-no-stir-fry/

Note:  Most Asian supermarkets or specialty stores have the thick-stalk oyster mushrooms.  The entire stalk is edible! 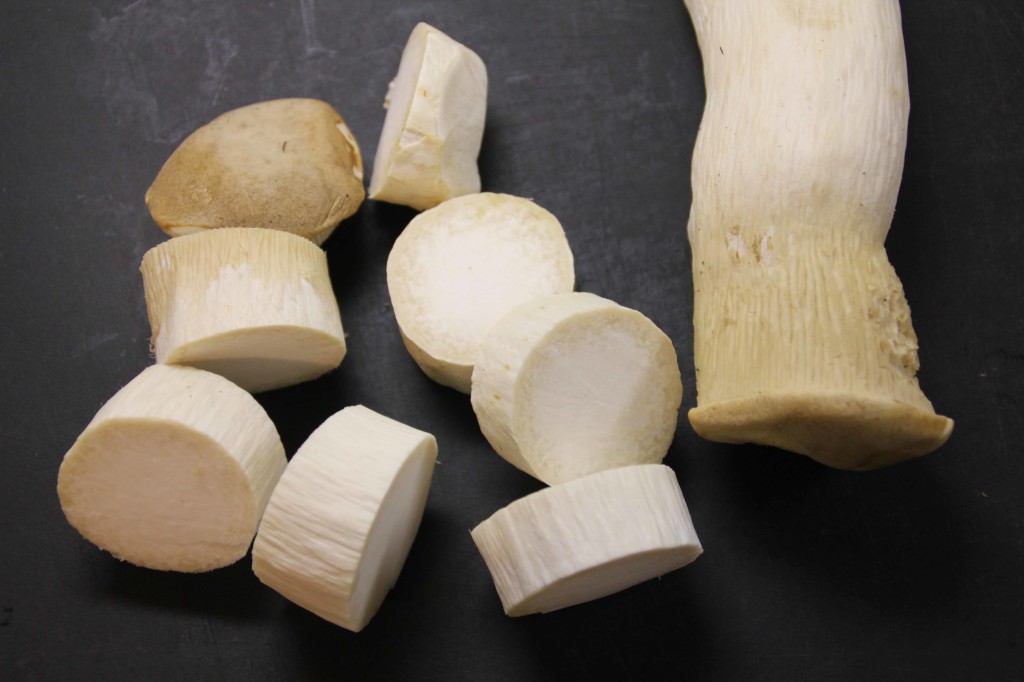 Directions:  Mix the marinade ingredients in a shallow bowl (long enough for the asparagus), reserving a bit of the oil to baste on the “scallops” to keep them moist and gleaming.  Add the oyster mushroom discs and asparagus spears to the marinade, tossing well.  Periodically move them around to make sure all is getting coated evenly.  Marinade for at least 2 hours.

Using a tongs or slotted spoon, remove the veggies and mushrooms and place in a glass bakeware dish inside your dehydrator (or in a very low temperature oven) for 2-3 hours.  Baste periodically if they are getting too dry.  The texture should be moist but the taste should be cooked by then (test one by tasting)  Serve over a bed of greens (I used arugula).  I used some of the marinade to flavor the greens and refrigerated the rest to use as a salad dressing base.

Directions:  process the ingredients together, adding more oil if needed.  Should be smooth but with some chunkiness – spread over the tops of the scallops and Enjoy!