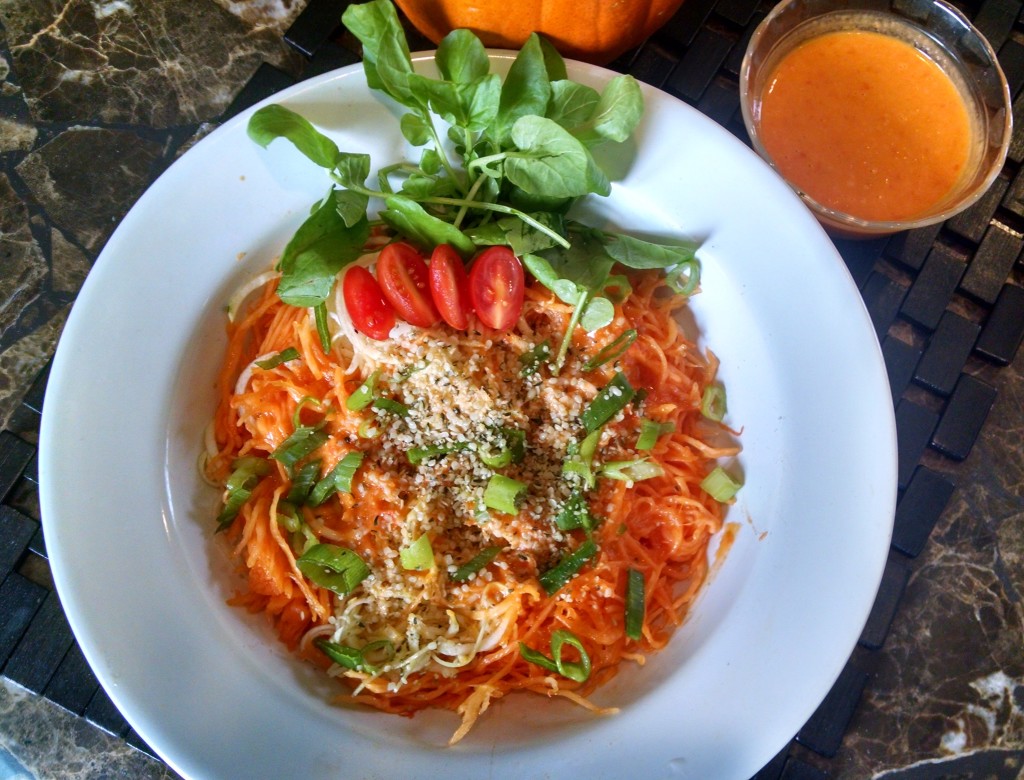 A few weeks ago I met a business associate for lunch at P.F. Chang’s.  While I love their vegetarian lettuce wraps and usually order them as my main meal, their tofu is questionably GMO-free (although they do make the claim on their Facebook page that while not  organic it is non-GMO).  I generally avoid soybean products unless they are certified organic and fermented, like miso, natto or tempeh.  Instead I ordered an intriguing-sounding “Shanghai Waldorf Salad” with lots of chopped kale, walnuts, grapes, radicchio and apple slices.  Truly a vegan’s dream salad, it comes with a tantalizing miso-lime dressing.

I enjoyed this salad so much that when my friend and I got together the following night for dinner I suggested the same place and ordered the salad to share with her.  She was equally smitten and we began to dissect the ingredients in the dressing, finally calling our server over to see if she would share the secrets.  What we learned was miso and lime and siracha (so that was the source of the orange-red color!)and “lots of oil.”

While I never found the actual ingredient list of the dressing I did find a nutritional breakdown, listing the calories for a full plate of the Shanghai Waldorf Salad as 540 but this is mainly calories from fat as each serving has a whopping 42 grams!  My first recreation was my guessing the proportion of the miso/lime/siracha/oil and it really tasted oily.  Good, but far too greasy.

On my next attempt I replaced some of the oil with grape tomatoes and a chunk of red pepper.  It needed something sweet to balance the tang (while I knew it had something sweet in it, the Chang’s server never mentioned sugar) so I added some coconut nectar the first time and used dates the next, both of them came out great.

While this is a wonderful salad dressing and dip, I wanted to try it out as a hearty main meal and came up with the idea of mixing it into some spiralized zucchini “pasta”.  I had a huge gorgeous slice of fresh pumpkin from the Asian market and thought I’d try to spiralize that as well but as I scraped away the seeds, I noticed that the beta-carotene-rich flesh pulled away in short, natural julienned slices that mixed in perfectly with the zucchini.

Now I have a new pumpkin recipe to add to my yearly Pumpkin Palooza repertoire!  I’ve never been a fan of siracha or even ultra-spicy foods but this one really deserves a try. 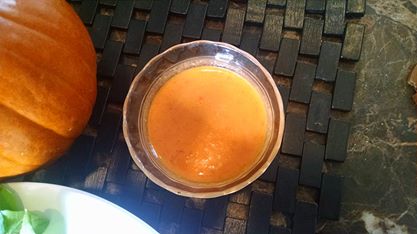 This is a very tasty dressing that can be used for salads or dips and makes a great drizzle for wraps.

For this recipe I used a combination of spiralized zucchini and shredded pumpkin to keep this high raw, but there are endless potential raw fusion combinations from traditional pasta to rice or kelp noodles.   I ate this at room temperature but you can even try subtly warming the sauce.

Directions:  Prepare shredded salad or spiralized noodles.  Place all of the ingredients in a blender and run until smooth, adding more sweetener or lime juice as needed.  Toss into the greens or “noodles” and mix well.  You will likely have extra dressing you can store in a covered container for several days in the fridge.  Garnish with chopped scallions and watercress and some hempseeds for added texture and protein.