Dr. LJ Rose, noted expert and author on subconscious dynamics and natural wellness, recently released her next-generation health program, the The S Cleanse: The Simple System to Supercharge Your Life.

We sat down with Dr. Rose to talk about the program, her experience with detoxing, and her motivation for developing an all-new detox program. 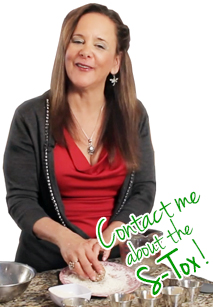 What inspired you to create the S Cleanse?

In 2008, after a progressive illness which left me unable to work for weeks at a time, I was diagnosed with an auto immune disorder. There were not many treatment options available and I was reluctant to try any of the medications I was offered to treat systemic inflammation, such as steroids.

Convinced that I could find a more natural solution, I did extensive research and decided that a plant-based diet, mainly raw, was something I should try; within 3 weeks I felt considerable improvement and continued on a high raw diet for over 3 years. Although since then I have varied my eating, allowing for more cooked foods, I am certain that ingesting nutrient-dense, enzymatically rich foods fight inflammation and help me digest my food more effectively.

As an adjunct to my radical “food therapy” I experimented with doing cleanses and detoxification. Inspired by movies such as “Fat, Sick and Nearly Dead” and research on the benefits of fasting, I started doing periodic cleanses, such as the Master Cleanse, Juice Fasting, and Dr. Junger’s Cleanse. I could definitely see the advantage of each one, but I felt like the first two were a bit radical – there were times I felt very deprived and hungry; On the Cleanse, I did not want to invest in the expensive supplements but I did appreciate the fact that it wasn’t as severe. At the same time, I feel that a cleanse should be more plant-based and not require supplementation (since ideally we should get the nutrients we need through the right diet)

I started doing my own program and felt much better, whether I did it for 4 days (my usual juice fast) or 10 (similar to the Master Cleanse). When I realized that what I was consuming was smoothies, shakes, soups, salads and some sensible snacks – I once commented to a friend, “well, I guess this isn’t a D-tox, it’s an S-tox,” and that led to the S Cleanse.

For more information on the Raw Fusion Living philosophy, see my post on “The 5 C’s”.

You’ve completed lots of fasts and detox regimens. How did your experience on the S Cleanse compare to the Master Cleanse or other popular fasts?

The first time I planned to do the Master Cleanse my idea was to go to a cottage we own, away from the city, where I could be away from distractions and perhaps do some writing and perhaps explore cleansing from emotional and psychological points of view (since this is my background and area of expertise). My husband made it clear that he was very distrustful of the idea that I wanted to do this radical fast and he wasn’t going to let me do it without supervision. He had the idea that I’d faint or wind up in the hospital.

I never felt that bad and in many ways the MC was a great experience, but there were some very uncomfortable detox symptoms and days where I felt rather hungry. Each time I repeated the MC I found it harder to do actually! What I would crave the most would be a salad. Thinking – how bad could it be if I want a salad? I realized that I was feeling deprived from chewing on solid foods. That made me start to think that if something is “that hard” it’s not going to work for most people.

On the S Cleanse there will certainly be some detox symptoms as when given high nutrient foods in measured quantities, the body will always cooperate by dumping out toxins. However, they were never unbearable. Taking an Epsom salt bath or using a hot or cold compress were both relaxing and helped me feel better within moments. The best part is that I was NEVER hungry (most days I didn’t even feel that I wanted everything allowed in the guidelines) and felt great physically and emotionally.

Can anybody do the S Cleanse?

One should always check with their medical professional or family physician before embarking on any dietary change or regiment. That said, many thousands of people do the Master Cleanse and Juice Fasting without any professional guidance as evidenced in the many online forums (and especially with the popularity of the “Fat, Sick and Nearly Dead” movie.

I think that most healthy or mainly healthy adults can do the S Cleanse because it’s really not a fast. It’s more of a Shift in eating with a focus on moderate calorie reduction and ingesting nutrient-dense, unprocessed and high energy plants, fruits and nuts.

My intention with S Cleanse is to give a lot more than just some recipes — some kind of supervision takes the S Cleanse to a much higher level. We offer one-on-one coaching, loads of support, information, inspiration and daily motivation and feedback.

What makes the S Cleanse such a better choice than, for example, printing a bunch of free online recipes and piecing them together?

Rather than depending on recipes – and we have many excellent “tried and true” ones from an expert and master chef in the raw food movement – we also give guidelines on how to utilize what one has on hand or that is closer to their food preferences. Each recipe section (i.e. Smoothies, Shakes, Soups, Salads, Snacks) has step-by-step recommendations on how to improvise along with useful tips and techniques that will translate very well when they go back to regular eating.

Which is your favorite S Cleanse recipe and why?

I found the miso soup broth (using the guidelines I threw one together with what I had on hand – didn’t need to do extensive shopping like in the Alkalinity Challenge) very soothing and filling. I also loved the Vanilla Shake (can’t remember what I called it in the recipes) – felt so decadent to drink this while I was, in essence, on a fast.

One of the appeals of the S Cleanse is the flexibility of a 4, 7, or 21 day option. When would you recommend the different options to consumers?

I would recommend that most people start with a 4 day; from my research I found that it takes 2-3 days for any real detoxification to take place. 4 days feels very “do-able” and I usually start on a Tuesday and finish on a Friday, which leaves my weekend flexible to different food choices. Once you’ve “proven” to yourself that you can successfully complete a 4 day program, it would be great to challenge yourself to 7 or 10 days. Twenty-one days is a great regime for people who have severe systemic inflammation or who want to instill new eating habits as three weeks is very effective for behavioral modification.

What would you say is the biggest and best benefit of the S Cleanse?

How very gentle the S Cleanse is and at the same time safe and satisfying – the recipes are so appealing that the best aspect (and the one I was most excited about) is how it motivates one to shift their eating habits. Most times you do a fast or a cleanse, when you finish you want to forget about it and leave it behind you. What you taste and experience in the S Cleanse is so appealing and uplifting. Even though some of the recipes are very different than what you are used to eating, many have reported that they are inspired to include some of their favorites when they go back to “normal” eating. These changes, over time, become exponential. Then, instead of having to do a radical cleansing protocol, one becomes accustomed to better eating habits and appreciates feeling better.

The S Cleanse package is valued at over $24.95, but you’re offering it for $2.99, which is almost 90% off. Some people might think that’s too good to be true. How are you able to offer it at such a discount?

Changing the way you eat is never easy. Deciding to do a cleanse could be a radical choice for most people and I want to encourage this by giving as much information and inspiration as I can because I truly understand how important and potentially life-changing this program can be – on many levels! When you take such a proactive step in self-care and healing, it reverberates to many areas of life.

When I approached my colleagues with this idea, they were super supportive and felt that it is “an idea whose time has come” as doing cleanses and detoxifications should not be something to fear. They wanted to contribute materials that could help keep the inspiration and motivation going and many have chosen this protocol to share with their own clients and students. We also have reduced our regular coaching and assessment fees radically to support individuals who are making such proactive choices.