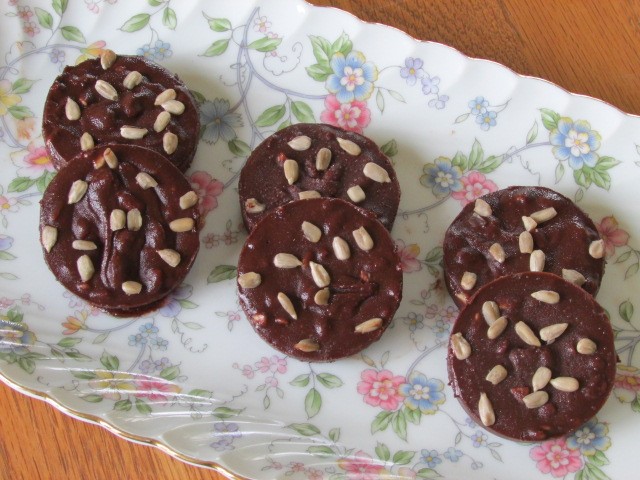 
Last fall we had a really fun day preparing recipes for the new book and photographing them.  Most of the participants were the local candidates for the Natural Wellness Academy “Holistic Health and Life Coaching” certification.  A few of the remote students (we have candidates in 9 different countries!) wanted to participate as they love preparing and photographing food.  This photo is from coaching candidate, Kristie Oren, who contributed a great Gluten-Free Pancake recipe last year, too.

This is one of the recipes in my upcoming book, The Forever Plan – 8 Simple Steps to Enlightened Eating due out early fall 2015.  The original inspiration for this delicious snack comes from my ultra-creative colleague, Stephie McCarthy.

You can find sunflower butter rather easily, but it will be from roasted seeds, not raw.   That doesn’t bother me  but the fact that most sunflower seed butters are loaded with sugar is an issue.  It’s always best — in my opinion — to have the option to sweeten foods with more enlightened choices!  MaraNatha and Once Again are the only organic brands I’ve seen without added sugars.

My favorite sweeteners (in this order!) are erythritol, coconut nectar, raw honey and maple syrup.  There are many low-glycemic options like stevia, yacon syrup, Jerusalem artichoke syrup, coconut crystals that I urge you to investigate and try for taste.  I am not a big fan of agave these days, but if you use it from time to time and are not a diabetic, that should not be a major problem.  The original recipe calls for vanilla-flavored stevia drops (Nu-Naturals brand has them) but I have never adapted to the taste of stevia.

Carob is a good vegan substitute for chocolate but not identical in flavor.   It is slighty sweet and blends well into drinks and desserts.     Made from grinding the dried pod of the carob tree (St. John’s Bread) into a powder, most brands of carob are actually toasted and not raw. You can also buy raw carob at some health food stores and online. Some people are sensitive to cacao and others avoid it as they consider it a stimulant and not strictly raw and use carob instead.  You can use either in this recipe.  Here’s another remarkable Raw Fusion recipe using carob powder – Carob Crispy Candies.

Directions: Mix the first 4 ingredients, then adding enough of the sunflower seeds to thicken the batter. Sprinkle in salt for a sweet/salty taste, or use more salt and no sweetener for a salty snack. Press into mini-cupcake or candy molds.   Decorate the top with some of the remaining seeds.
top with whole nuts and a light sprinkle of whole grained sea salt. Freeze until firm.