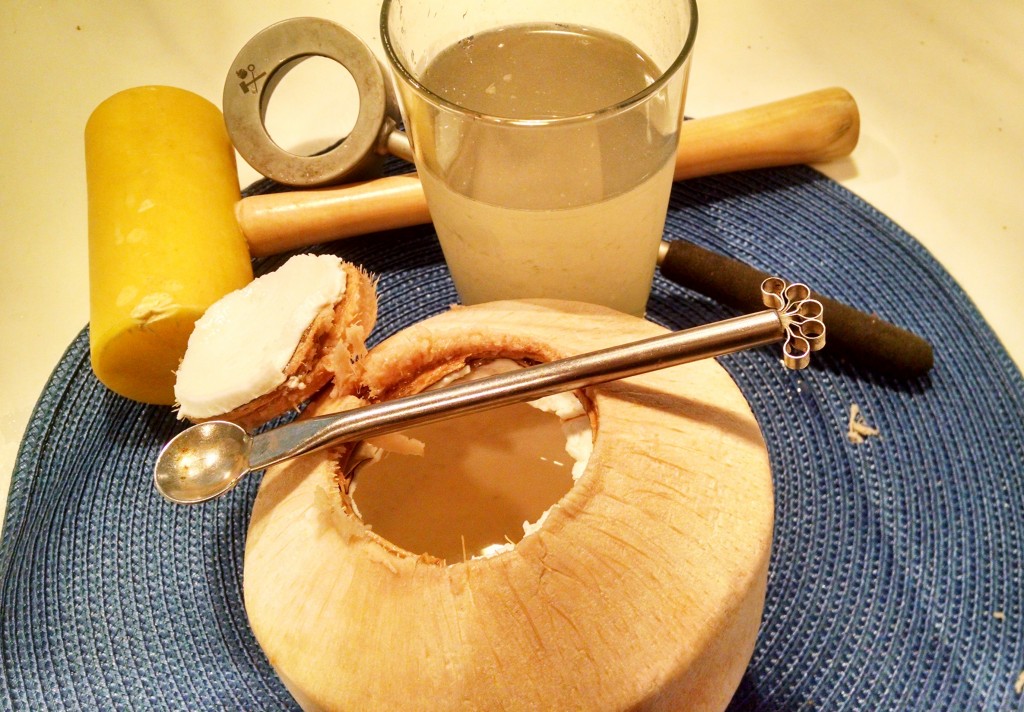 Mindfulness is about being fully invested in the moment, which is particularly gratifying when you are doing something you cherish. Eating a young coconut has become such a relaxing (and delicious!) ritual for me that lately I’ve been turning all my visitors on to them.

Have you ever had a young coconut? If you’ve visited the Caribbean Islands or Hawaii, you may have seen vendors selling them at the side of the road. The lop off the top with a machete and give you a straw to drink the cool, refreshing water.

I can assure you that while the coconut water in cartons, so readily available these days, is not remotely like having the “real thing.” My guests are always surprised at how radically different the taste is from the packaged variety. I have nothing against the packaged stuff — it’s convenient for smoothies , but I don’t find it particularly pleasant to drink. Some studies have suggested that coconut water, rich in sodium and potassium can replace electrolytes after vigorous exercise.

But these treasures provide so much more to enjoy than just the water!

Young coconuts are not yet the fully mature ones; those are the kind that are dark brown and hairy. These are usually shaved down from the green outer peel and have a light, fibrous husk. I have seen them in health food stores and upscale markets, always in the refrigerated produce department. But I usually buy them at Asian markets, where they cost half as much.

When I spent some years eating mainly raw foods I had a local market that opened them for me and covered the top in plastic wrap so they wouldn’t spill. That was a great service as I am just not good maneuvering with large cutlery (my husband insists that I am never to be allowed near a power tool!) When that store moved I had to abandon them (although I have heard that a major health food store chain will open them for you).

I found a really nifty tool last year (Coco Jack) that has made it so much easier to get at these luscious fruits, so I’ve been able to indulge again. The soft flesh of the young coconut can be easily scooped out and used to make puddings, sauces, icings, vegan yogurts etc. or can be enjoyed as a meal or snack.

When you open the young coconut, it’s a moment of delightful discovery as you never know at what stage of maturation you will find them. *This happens rarely, but if the flesh is pinkish and the water very cloudy, it’s spoiled and you should just discard.

How I make this a ritual —

First I pour out the water in a glass and take a small sip. The sweeter the water, the more mature, meaning that the flesh will be firmer.

You can also test that out by scooping out the coconut meat from the top portion (that comes off so easily with the tool.)

I bought a special “young coconut scooper spoon” at a raw foods festival some years back. As you can see in the photo the back end will even allow you to make coconut noodles. Lacking one of these a melon ballers or any spoon will work, even with the firmer, more mature meat.

Scooping out the flesh I savor every bit of it; peering inside I can see any white meat left behind. The taste is sweetly satisfying without being cloying or loaded with sugar; for this reason, it makes a great alternative dessert.

I leave the liquid for last; there is a perfume and bouquet to coconut water, unlike any other beverage. When I drink it, I feel as if I’m being blessed by nature.

So, if you are looking for ways to imbue mindfulness into an act as mundane as eating, indulge in a young coconut. I’m pretty sure it’s going to become one of your favorite rituals, too.