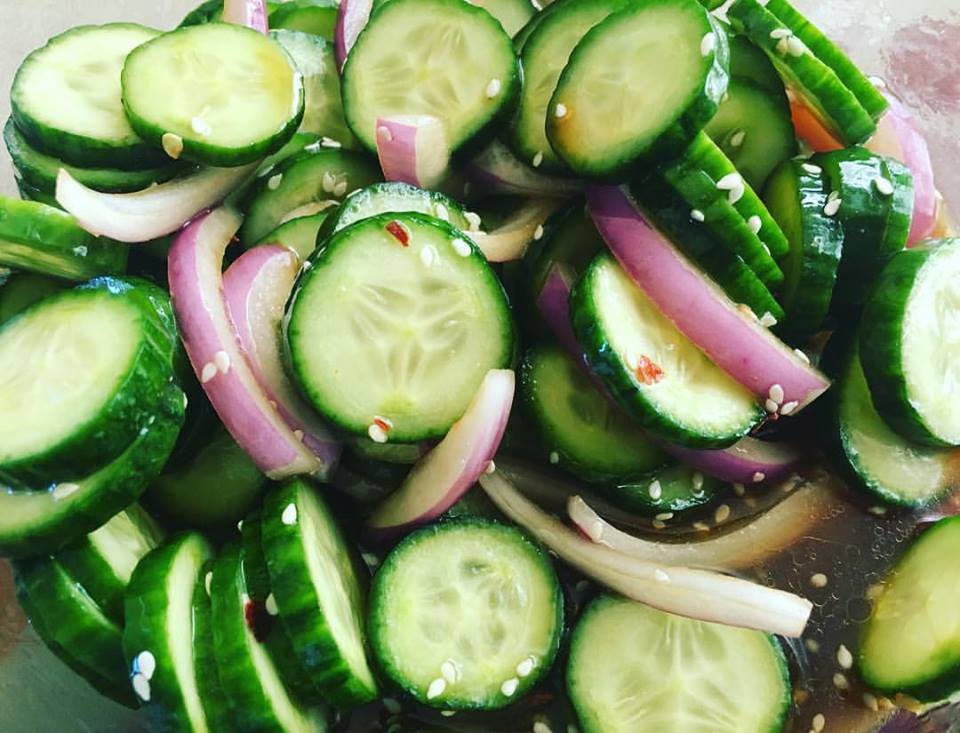 I love Korean food!  Besides their tantalizing BBQ, I absolutely love eating all the tiny saucers of “banchan” or side dishes that they serve you before the main entree is brought out.  I enjoy pickled vegetables, fermented foods, vinegar and sesame oil, so I had to mentally notate all of the ingredients I tasted in my head and try to figure out how to make something like this with cucumbers.

Normally I like to enjoy a quick and simple bowl of sliced cucumbers with vinegar and salt, but I thought, why not try and re-create a Korean version of this!  I could taste pretty much all of  the ingredients that this magical vinegar and sesame tasting sauce had, but it took me a bit to figure out that I should use rice vinegar instead.  The red onions were  my own personal touch because I just love red onions.

I used healthier alternatives for everything but I’m pretty sure if you used regular soy sauce and sugar, it would taste just as good.  The ending result was just as I had suspected!  A bowl of sweet, vinegary, salty, crunchy Korean-tasting goodness!!  Enjoy!

Directions:  In a small bowl combine rice vinegar, sesame oil, tamari sauce (or liquid aminos), stevia or salt.    Stir until combined and set aside.  Take cucumbers and slice to desired thickness.  Take red onions and cut into thinslices and set aside.  Add cucumbers and red onions into bowl of sauce and toss until cucumbers are fully coated.  Sprinkle on the sesame seeds and toss again and add chili flakes to taste.

*Note:  If you use coconut aminos, this will give a lighter and sweeter taste than tamari (gluten-free soy sauce, which is much saltier.)  Vary the other ingredients accordingly – you would need less sweetener.  You can also use regular black or even white pepper in lieu of the chili flakes.

Note from L J:  Ever since I saw this on Sherry’s Instagram page, I’ve been wanting to make these.  Got back recently from a trip and those ingredients are on my shopping list!  I’ll post my feedback when I get a chance to try this out but I can’t imagine it being anything but SUPERB!