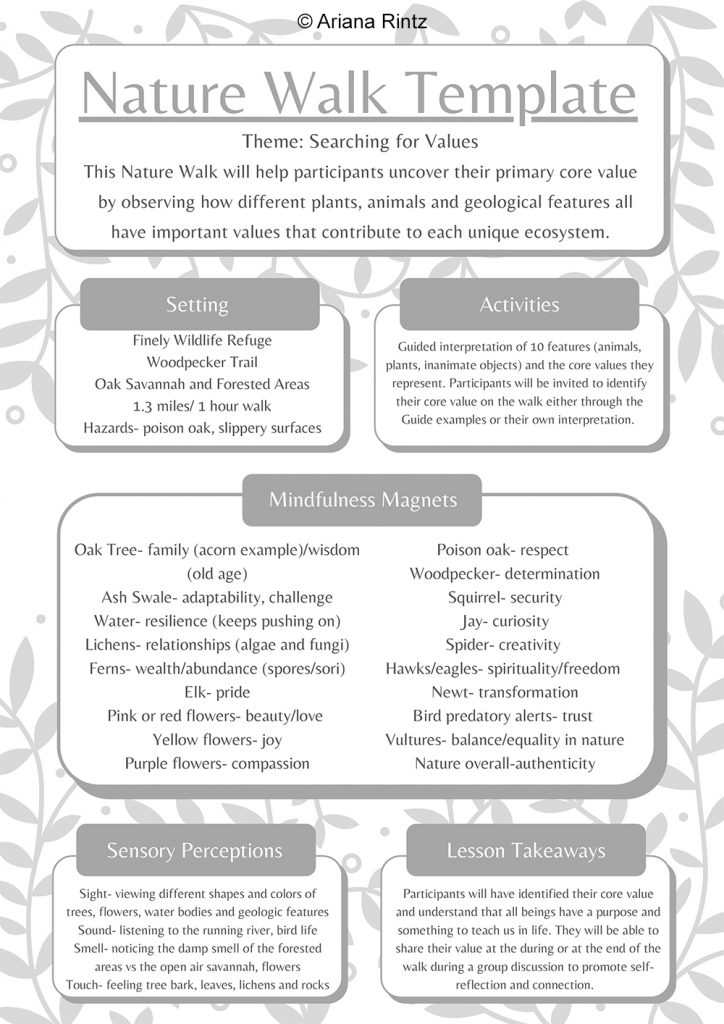 We started out the nature walk at the base of the Woodpecker Trail at Finley National Wildlife Refuge. After a short introduction on what my role was during the walk and what to expect, I discussed the concept of Attention Restoration Theory briefly as a precursor to starting the walk, and how focusing on the sounds, sights and smells of the forest can be a pathway to mindfulness.

Before beginning the walk, I conducted a short grounding exercise that I titled “First Impressions”. I asked the participants to close their eyes and I placed a crystal in their hand. I discussed coming into the moment by feeling the texture of the rock. What sensations did they feel on the surface, what do you think this rock looks like just by feeling it? I had the participants describe what they were sensing, and then I had them open their eyes. They were surprised to find the rock was a beautiful crystal! First impressions aren’t always what they seem.

Next we arrived at our first stop, a babbling brook, which was very soothing for everyone to listen to. Everyone had a different interpretation of what the stream might represent, everything from serenity, to going with the flow, to resilience.

After continuing on to the forested side of the trail we found about 6 examples of values that I shared with the group. I asked them their interpretation first before sharing mine. It made for a great discussion on why values are important in each and everyone’s life, and how they differ from person to person. For example, we found a lot of poison oak and discussed how an interpretation of a value for it might be respect. We found elk sign and discussed how that might represent pride, family, or sexuality.

We discussed the texture of the bark on many different kinds of trees, and how the bark is thick and grooved the slower a tree grows. We discussed the adaptability of the Ash tree in the waterlogged part of the forest, as well as the mighty oak and how it may represent wisdom, and the Douglas Fir with it’s dense and thick bark, representing protection. We felt the Ash leaves, and one of the participants noted that the leaves felt like velvet. We looked under the fern fronds to locate the Sori (of which there are thousands) and I noted that wealth or abundance may be a value that someone might have in their life. The participants were able to see a different perspective in how wealth may be important in one’s life, even if it’s not one of their values.

As we continued on to the Oak Savannah portion of the hike, we located Irises, Camas Lilies, newts, and vultures. We discussed what the color purple in the lilies might represent as a value and came up with loyalty, spirituality and openness. 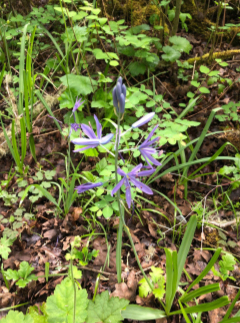 We found newts in the seasonal pools. We talked about how they might represent transformation. We also discussed the composition of lichens and how they represent the importance of relationships because they are made of both a fungi and an algae species that rely on each other to exist in harmony.

When we arrived at the shelter towards the end, we saw a kettle of Turkey Vultures flying, and as it turns out, one of the participants has a strong affinity for vultures and told a story about how he believes that is his symbol animal! It was a really wonderful story to hear and it ended the walk very nicely by having a participant teach others about their interpretation of vultures.

At the very end of the Walk during the debrief, I asked the participants to share what value they may have found on the walk, or if any certain values that they already had were cemented became more pronounced, or if something spoke to them in particular. One participant mentioned they had a new view of vultures (representing the importance of their role in completing the circle of life) that they didn’t have before and I thought that was really amazing that the group was able to learn from one another! The other participant mentioned that he realized his number one value was “Connection”, not only with other people that he cares about, but with nature. He was reminded that it makes him feel whole, and less stressed to be out in nature. He thanked me for the experience.

I ended the discussion with a meditation that I have been doing for 15 years as a sacred prayer for nature. The rest of the walk was a quiet reflection on what the participants learned.

You split me and tore my heart open, and filled me with love.
You poured your spirit over, I knew you like I knew myself.
My eyes are radiant with your light.
My ears delight in your music.
My nostrils are filled with your fragrance.
My face is covered with your dew.
You have made me see all things shining.
You have made me see all things new.
You have granted me perfect ease.
And I have become like paradise.
And in becoming like paradise, my soul is healed.

It was such a joy to conduct a Nature Spirit Walk. The space that nature creates for people to express themselves freely may well be an amazing accompaniment to my wellness coaching. One of the participants was able to share during the walk some of the things that they were struggling with and I was so happy he felt comfortable doing so with me and the group.

It is my hope that my deep reverence and fascination with nature will emanate from me and hopefully touch the participants on a deeper level. I also think my creativity in the design of these walks will really speak to people in regards to living a life more in alignment with their purpose, and having a safe space to offload stress.

After reflecting on this walk, I realized how much I learned about myself and from the participants in the process. During the walk, I found myself feeling a little stressed out about what everyone was experiencing, and I just need to learn to relax and not force the process. It was great learning moment for me to be challenged by the loquacious tendencies of one of the participants because even though it threw me off a bit, I was able to see that if people are coming on nature walks to destress and connect with nature, they are likely not already going to be calm when then arrive! I now know that I need to be prepared for all of the rainbow of personalities that will come on my walks with me and be able to flex to their style of communication and needs while still taking into consideration the group as a whole.

During the nature walk, I saw: A babbling brook, deer and elk rub, turkey vultures, newts, tadpoles and a variety of trees.

During the nature walk, I felt: Initially, I was a little anxious and a little stressed. As we moved through the forest, my anxiousness and stress began to fade and my curiosity and wonder grew. By the end of the walk, I felt more at peace and connected with the world than I have felt for a while.

The most important thing I took away from the walk was: To remember how much healing I get from just being in nature. I also refocused on remembering to take care of myself; that I can help others and be there for others better if I have taken care of myself.

Things that the Guide did well: Ariana put me at ease from the beginning. She was not only knowledgeable about the flora and fauna; but also its ability to open me up to discovery. She helped me to use what I saw, heard and felt in nature to discover not only what some of my true values were, but also discover values that were missing in my life.

How Nature Therapy can Help the Environment by Making People Care 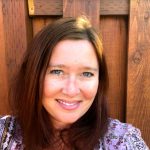 I was a wildlife biologist for about 8 years, and then pivoted to sales and marketing for the last 7 years. I am completing Life Coach Certification in February and hope to combine Nature Therapy with coaching in my practice. I currently am a contractor for a company called Project Passport, they do virtual wellness retreats and are a start up company, but things are picking up! I enjoy fly fishing, birding, hiking, snorkeling and being on the water. I live in Oregon, and its the most beautiful place I have ever lived.