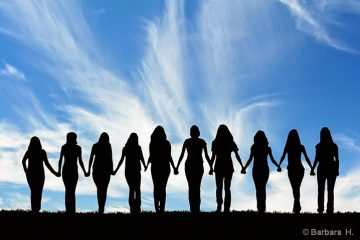 These have been a series of challenging years for many I know, but what has uplifted me is how many of my cherished friends  are gathering together their “tribes”; Developing or deepening their relationships with like-minded Beings and forming bonds that can sometimes go deeper than those we have with our blood relatives.  These Soul Sisters and Brothers are like touchstones who help us sustain hope and faith in a confusing and troubled world.

I come from a tiny family (one older brother) and from parents who also came from tiny families (and their extended families were mainly wiped out in the Holocaust, which my parents survived.)  I’ve always dreamed of having a sister and have been blessed with many deep sister-like relationships over the years.

These past few years have brought a lot of sorrow, but also some gifts:

One of the saddest events for me was the death of my “second mother” last August.  My mother passed away when I was in my early thirties and a few years later I was blessed to meet Arlene Kelman as part of my work with the American Board of Hypnotherapy.

Arlene was Dr. Krasner’s (the founder of ABH and my mentor for many years) longtime partner and the comptroller of this large membership organization, which also included one of the very first online courses in hypnotherapy training, the American Institute of Hypnotherapy.  Not only were Arlene and my mom born the same year; they were only days apart.  They were both women of tremendous elegance and grace and part of the Greatest Generation.  For the thirty-plus years that I had the privilege of knowing Arlene, she was like a second mother to me.  And although I moved away from Southern California in 2005, we remained in regular touch and would visit together when I could make it out there.

I was not able to attend her internment in Rhode Island when she died last summer, nor as a non-blood relative, did I recite the kaddish, or Jewish prayer for the dead.  In the Jewish tradition we usually hold a memorial service or tribute to the deceased one year after their death when the headstone or plaque is placed on their grave.

These remembrances are my memorial to her.

Arlene’s daughter, Lori Kelman, wrote these words on her Facebook page when she announced her passing:  “She walked in beauty and grace.”  I can think of no better epithet for her.  Arlene was a beautiful and classy woman that charmed all of us that came to know her.  She not only ran the businesses impeccably and successfully, she also managed to coordinate the absolute best yearly conventions each February in Southern California.  Hundreds would attend and although she made it look effortless, having volunteered more than a few times, I knew the massive amount of work that went into planning and executing.  There is not a single one of my ABH peers and colleagues that would have anything but the fondest memories of those conferences.  Classy to the core.

Arlene grew up in Rhode Island and had a very tight and supportive relationship with her two sisters throughout her life.   She was stylish and gracious and never forgot my birthday or holidays – in fact, she always made her own unique greeting cards; They were so cleverly hand-crafted that several of them remain tucked away as precious keepsakes.

The latter couple decades of Arlene’s life were extremely challenging;  She lost one leg above the knee and had to learn how to get around that way, but it didn’t stop her from swimming every single day of the year, which is how she kept so svelte and toned.   She handled her disability with humor and grace and didn’t let it stop her from being active and traveling, when she could.

One of my favorite Arlene memories:  Early on she invited me to be a speaker for their Orange County conference on several occasions.  At the time I had an extremely busy private practice in Los Angeles, and it was too hard for me to take off on Saturdays.  One year I called ABH and left a message for her that I was officially signing on to be a presenter at the next conference.  I told the person who answered the phone:  “Arlene is not going to believe that I will actually do this, but tell her I called on Yom Kippur and that I commit to do this on my Jewish word of honor.”  Arlene told me that when she got in the next day and they told her of my offer, at first she said:  “She’ll never do it.”  But when they added my commitment, she responded:  “Oh, then I know she is fully on board!”

Arlene had one daughter, Lori, who lived for many years in Boston and then in Colorado.  We crossed paths a few times over the years at conventions or holidays but really only from a distance, although Arlene often mentioned to both of us that she thought we would have a lot in common.  Eventually she moved to Orange County to help her Mom as she was getting on in years and disabled by the loss of her leg.  A few years ago I asked Arlene to please give Lori my phone number “just in case.”  Lori then friended me on Facebook and we were able to get more updates on what was going on our lives this way.  And then, last August, I got the call that I had dreaded.

The beautiful light at the end of this sadness is that Arlene posthumously accomplished bringing her daughter and I together.   Lori and I discovered that we have so many things in common, including having spent time in work/study programs in Israel in the very same year!  She also hung out with her cousin on the exceptionally beautiful campus of my husband’s prep school in Detroit (Cranbrook), one of my favorite places.  Although the pandemic has limited our travel for the time being, we plan on getting together when we can.  We check in with each other several times a month and affectionately refer to one another as “Sis.”

Having just put final touches on the “Afterlife” study guide for the Spiritual Wellness Specialist program that we offer through NWA, it was the culmination of over 50 years of research, since I started reading Edgar Cayce when I was only 15.  Something that I am absolutely convinced of is that we do go on in Spirit, after we transition from life. And I know that Arlene is aware of her lovely orchestration of Sisterhood.  May her memory be a blessing.

Sisterhood is truly a gift.  Treasure those you hold close and seek to develop those sisterly/brotherly connections.  They are what will see us through dark and uncertain times.