Gina Truscelli-Percival is a mud pie artist, voice-over artist, and Certified Nature Therapy Guide candidate. The following is an excerpt from one of her module submissions.

At first my object of attention seemed a casual, trivial attraction. I chose to begin a relationship with a tree. It was an adolescent tree, a maple. I met this tree in the middle of a medical clinic parking lot. I had dropped off my dad for a doctor appointment and decided to wait outside.

The tree had obviously been planted as a curbed, aesthetic feature in a parking lot expansion project. It was planted quite a distance from the clinic entrance, an environment that wouldn’t typically be considered a nature retreat.

I walked from my Jeep and stood next to the tree. I looked around, began to breathe in its essence, and gradually related to what its everyday existence was like. I heard construction noises, an occasional yell with supervisory direction, and the “did ya hear what happened over the weekend?” laughter. 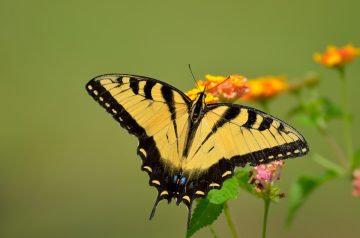 As I reached to touch the tree, a yellow butterfly said hello and birds sang overhead. I was reminded that the tree would certainly witness other living things besides noisy humans. Despite my initial apathetic attitude for the tree, I felt I was forgiven for my disinterest and was eventually invited to connect. My physical connection began from the ground. I closed my eyes to feel the trunk. It felt rough at ground level at its most mature diameter and then smoother as I reached up toward its branches. I was able to reach a branch and observed the smallest twigs and leaf stems had a slight shine to them. Its shade hadn’t been fully accomplished yet, but it was significant enough for me to see leaf shadows dancing on the pavement.

The tree explained its journey from a friendly tree farm, an uncomfortable, windy ride on a delivery truck, and then its first days at the clinic. I couldn’t help but ask the tree if it experienced loneliness and confusion once planted or maybe even considered itself forsaken with no profound purpose.

I began to imagine the tree might be questioning why its permanent home, unlike the “more fortunate” trees, was miles from a forest, a mountainside, a beach, a park or even a backyard. It was in the middle of a paved, dull parking lot.

I was saddened that the people parking near this tree were likely experiencing feelings of nervousness, grief or worry. Even the employees parking nearby may be too focused on walking toward the entrance to take time to enjoy the tree. Perhaps they would consciously realize the tree, but would they give it the value of meeting it during a calm, meditative walk through a forest? 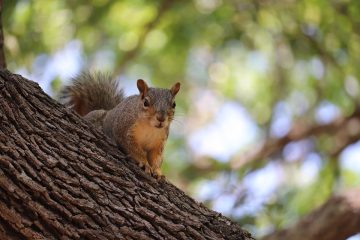 I stayed with the tree for a few more minutes to listen to slight whips and brushing sounds from its leaves, envisioning its first root growth and its enjoyment of the whistles and hums from the nursery workers who tended to it. Once again comfort came from witnessing other nature friends like insects, squirrels and birds engaging with the tree.

I walked back to my vehicle to go over the notes I had made. I was torn between feelings of empathy and the excitement from my successful experience. I chatted with the tree from my vehicle, thanked it for the stories and wished it well.

Eventually my dad came through the clinic doors, quickly moving out of the way of a young man pushing a woman in a wheelchair. She wore a head scarf and I immediately assumed cancer was her reason for being at the clinic. The young man pushing the woman down the sidewalk ramp, paused, leaned in to say something and then, lo and behold, he purposefully walked with the woman the distance to the the tree! I was so excited! It was silly for me to assume I’d be the only person on that day to enjoy the tree. It was a wonderful realization.

Life is Everywhere. I took on the challenge of finding the good – the life – in a dried up Giant Sunflower which had been tossed into the burn pile in our back field. I was excited and curious at the get-go. The study of the sunflower was relaxing and I felt a child like joy while I observed. I was blown away by the pattern of the seeds remaining and the spaces they nestled in were lined up so beautifully. The seeds were edible. Rich and satisfying. I discovered a fragile fuzz along the stem, mostly noticeable where the stem began below the flower. The colors were golds and beiges and surprisingly, considering the angle from which the sunlight shone, the shells on the seeds had a purple tint. Inside the shell was bright white. I was able to find areas on the flower where birds had perched to feast. This activity left me feeling free of the day’s stressors and helped me zoom out, realizing the value in slowing down and being in nature.