When we go on nature walks, I let my two-year-old set the pace. Adults tend to rush along trails, not allowing themselves to settle in one spot for too long. When we have guests accompanying us, I can occasionally see annoyance on their faces when we stop, yet again, to spend time with an unassuming vine or shell along the trail. I understand the mild frustration; I sometimes find myself caught up in this mindset, too.

That’s because we adults usually have goals, whether we realize it or not. We want to get to the end of the trail. We want to get to a certain scenic spot. We want to wrap things up within the hour. At least in mainstream American society, we’ve been taught to focus on the endpoint and to see the journey as an inconvenience along the way, rather than a worthy experience in and of itself.

On top of this mindset, adults tend to gloss over nature’s smaller offerings. Decades of life experience mean we think we’ve seen that, done that. We already know how the bark feels; we already know the colors of a leaf. We box these multidimensional experiences into words, compressing them into generic groups. Bark is rough; leaves are green. That’s why we feel that meager seconds are sufficient to fully appreciate a moment. Even a few minutes can feel gratuitous. “Yes, it’s a leaf,” our brain chatters. “Nothing special. Time to move on!” 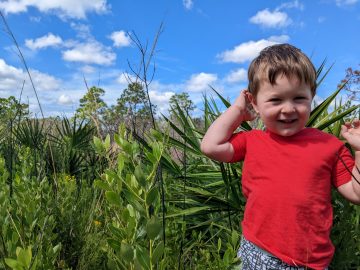 Toddlers, however, know better. New to the world, every little thing can be full of delight and exploration. They are not yet fully beholden to society’s conditioning; they lack that little voice urging them to consider the time, to remember the chores at home, to get going. And they certainly aren’t scared of a little dirt, even if it ruins their nice shirt (which they’ll soon outgrow anyway). Toddlers know, without knowing, that dirt washes off and that the chores can always be done later, but this moment can never be recovered once lost. They simply allow themselves to immerse completely into the now, to linger in the amazement of nature’s wonders across all scales.

A leaf is green. And waxy. And another green! And a yellow spot here! And it crackles when pinched! And smells when scratched! And the veins trace cool patterns! And the stem rolls in the fingers! And it’s different than this other leaf!

As my son and I set out on the trail a few afternoons ago, the first thing he noticed was the sand. With each step, it squished up around the sides of our sandals: an initial annoyance to me, but to him, a pleasant, warm sensation. “Hot,” he said with a smile. “You’re right,” I replied, smiling back. “It feels nice.”

A pinecone laid in our path. He picked it up. “Ouch!” he cried with dramatic flair, tossing it ahead.  I laughed: “They prickle!” For the next pinecone, he took a gentler approach, prodding the scales with a fingertip. Now, a jut of wood from the sand called to him. He dug, the small tip giving way to a large mass buried in the ground. “It’s a root,” I explained. “Part of a tree that grows underground.” He considered its weight, straining as he heaved it to the side. This motion spooked a grasshopper resting in the trail, which loudly and angrily flapped a short distance away. Of course, this noise only encouraged my son to give chase. “Bug! Jump!” 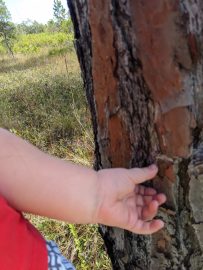 I stopped to admire a blush of purple fall wildflowers next to us. My son raced into the shrubs, rubbing the leaves with his hands. As he went, a saw palmetto brushed against his back. “Tickles!” He giggled. He rocked his back against the fan, giggling harder with each pass. He noticed the cypress wetland in the distance, beyond the saw palmettos. “Tree!” he exclaimed, starting in their direction. I held his hand. “We’ll go to the trees,” I assured him, “but let’s take the trail.”

He acquiesced, but within seconds, a huge pine tree called to him. “Tree!” He pointed. Excited to get to the cypress, I wanted to resist, but I reminded myself to follow his enjoyment, both for him and myself. At the pine, he ran his hands over the charred bark, marked by recent forest fires, intrigued by the black smudges it left on his skin. He asked me to pick him up, to better explore higher parts of the tree. As he leaned forward from my arms, he set to work peeling the layers of bark, which crackled and sloughed off in chunky, blocky pieces. The burnt bark gave way to fresh reddish-brown bark. 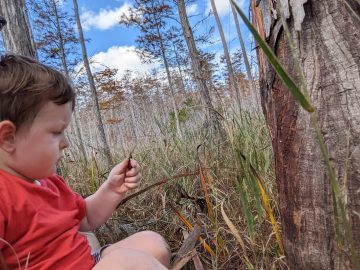 Eventually, we arrived at the cypress trees. We scrambled into the wetland, which was dry, as is typical this late in the year. I carried my son above the scratches of the underbrush; he urged me onward and farther still, gesturing ahead, the cypress trees thickening in size and number as we went. Finally, though, the toll of his weight on my biceps dictated we rest, so I set him on the ground in a clearing. He instantly clung to the trunk of a thin cypress tree, pretending to clamber up its height. This drew his attention again to the bark, of such a different kind than the pine. Its smoother, silvery peeled off in long, thin strips, revealing underneath a brownish surface.

At last, noticing his tired affect and the sun’s position in the sky, I hinted that we ought to head home. My son shook his head, patting the ground. “Sit.” My son lounging in my lap, we settled into a nook in a circle of young cypress trees. Overhead, their orange autumn needles framed the sky. “Birds,” my son signed. Two red-bellied woodpeckers flitted between the branches, knocking and chirping. “It was a good idea to sit,” I said. “Thanks for the idea!”

Through their innocence and wonder, young children intuitively make excellent nature therapy guides. Given the myriad benefits of nature connection, this instinct should be celebrated, nurtured, and encouraged in children, and adults should seek to emulate it until restored in themselves. Of course, adults will always have some level of cognizance of responsibilities that young children do not have the capacity to even consider, much less bear. At many times, the demands of real life require that we rush by, that we turn to familiar terms and expectations, rather than truly leaning into an experience present before us. However, there can always be opportunities found, even ten minutes’ time, to settle into a moment and allow our inner child to once again revel in the smallest pleasure. Once a day, I try to allow myself the space to observe a flower, a bee, a tree that catches my fancy. On the most difficult days, as I center my focus, I can hear my mind’s constant hum start to settle. What happens in that space needn’t be mapped out; leave yourself open to the experience. What a wonderful gift that can be shared between children, adults, and nature!