Silva Mirovics, one of our cherished coaching graduates from the Natural Wellness Academy recently posted this photo on her Facebook page.  It looked so appealing and easy to make that […]

Creative Green-ing, Raw Fusion Style Having difficulty getting enough greens in your diet? The following excerpt is from Green For Life by Victoria Boutenko. “Greens Make The Body More […] 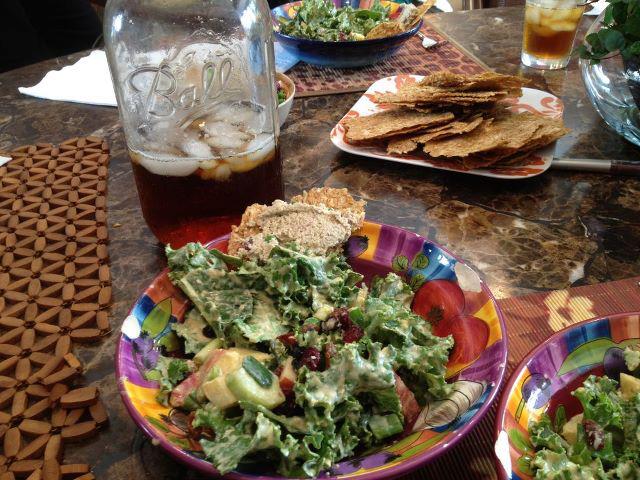 I had some friends over for lunch the other day to introduce them to the raw foods lifestyle.  This is a photo featuring a bowl of the Curried Apple-Cucumber-Kale-Cranberry Salad which I served with Sunflower Seed Pate, Onion Crisps and a really refreshing Green Tea with Apricots, sweetened with stevia.

Have to admit that I get such a kick out of serving raw foods to people who have never tried them before as the response is always favorable and rather astounded by the gourmet and sophisticated taste sensations.

Especially fun is finding fabulous ways to serve kale, a green that is probably one the most nutritious plants in the world, but not one that most people are accustomed to eating.  After all, when you are served a plate of food at a restaurant garnished with some kale, how often have you actually munched down on that leafy green?

For this recipe, leaving the dressing for about 20-30 minutes on the salad and even massaging into the kale will actually soften the texture and make the kale much more delectable.

As I am sipping on the first of my green juices for a 3-day detox, I am reflecting on the movie “Fat, Sick & Nearly Dead” which I streamed last night from my Netflix account.

This inspiring film was created by Australian entrepreneur, Joe Cross, documenting his astounding weight loss and reversal of several chronic medical conditions all through “rebooting” his system through a 60-day juice fast.

At a truck stop in Winslow, Arizona Cross met a man who was the same age, extremely overweight and suffered from exactly the same painful skin condition (Urticaria) that had plagued Joe for years.  What seemed like a random meeting lead to a life-changing moment for both of these men.  While Joe had already begun his journey to conscious self-care and better health, Phil Staples weighed over 400 lbs and was living a very reclusive and lonely existence.  When he reached out to the filmmaker, Cross flew back from Australia and gave Staples all of the tools to change his life.

I strongly recommend downloading or renting this 95 minute film through Netflex or Itunes.  The use of animation and provocative interviews with nutritionists and healthy eating pioneer Dr. Joel Fuhrman (“Eat to Live”) and other case studies.

Whenever I start teaching at a new locale, my inaugural class is “Raw Foods 101” – teaching the basics of the raw foods/raw fusion lifestyle with demo’s of delectable green smoothies and scrumptious salads.

It’s always very uplifting for me to get enthusiastic feedback from  participants on how they are integrating green smoothies into their lifestyles and how their families are also enjoying them.  Often they share their favorite recipes with me, but invariably their concoctions contain ingredients that I would not recommend.

I admit to being a purist on green smoothies:  While experimenting from time to time with adding some nuts, nut milk, protein powders, dairy etc. is perfectly okay – hey, variety IS the spice of life, after all — I am extremely loyal to Victoria Boutenko’s (Green for Life) marvelous creation and believe that the formula works, as is